In my last post, Asian American Mental Health: Confusing Doing Well with Feeling Well, I described my life with bipolar disorder, lack of family support, a friend’s suicide, and my diagnosis at 18-years old.   Also, there were a bunch of Rocky Balboa and boxing metaphors. Working in mental health nonprofit, I’ve seen countless end the stigma campaigns, which are valuable. But there are many other obstacles we rarely discuss.  For instance, if someone comes to...

In my last post, Asian American Mental Health: Confusing Doing Well with Feeling Well, I described my life with bipolar disorder, lack of family support, a friend’s suicide, and my diagnosis at 18-years old.   Also, there were a bunch of Rocky Balboa and boxing metaphors.

Working in mental health nonprofit, I’ve seen countless end the stigma campaigns, which are valuable. But there are many other obstacles we rarely discuss.  For instance, if someone comes to me seeking help for a depressed family member who does not speak English, how do I find a professional who speaks his language? In my interview with psychologist Lilian Shin, she opened my eyes to barriers like how American’s Euro-centric patient model does not take into account Asian cultural norms. Thankfully, there are ways to bridge this communication gap:

My Interview with Lilian Shin

We are a country built on diversity and acceptance, and ensuring that patients of all cultural backgrounds receive the best care will necessarily entail more diverse models of health care practice.

(me): What is your professional title?

LS: I am a Social/Personality psychologist who studies subjective wellbeing in interdependent cultures, such as East Asian cultures. I have an M.A. in Psychology and am currently working on my Ph.D. I am particularly interested in how emotional well-being looks differently for Asian Americans and how treatment and interventions should be tailored accordingly.

JG: How common is mental illness among Asian Americans?

LS:  Mental illness prevalence rates are the same for Asian Americans as those of the general U.S. population(approximately 26% of persons have mental illness within any given 12-month span of time). Importantly, however, Asian Americans use psychological services at lower rates than European Americans. And those who do use services have more severe conditions, indicating that they delay seeing a professional until problems have become very serious.

JG: What cultural factors make it harder for Asians to seek help?

LS: Stigma and shame have been identified as major deterrents to the utilization to mental health services for Asians and Asian Americans. There is a perception, especially from the older generations (e.g., more recent immigrants), that families have to protect their pride and honor and that needing help is dishonoring and shameful for the family. Ideas such as these are rooted in ancient historical traditions such as Confucianism, Buddhism, and Taoism, that emphasize harmony and interdependence more so than other cultures.  Because of this interdependent and collectivistic mentality, Asians may view family members as extensions of themselves, which contributes to the shame of having to admit that they need help because it compromises a family pride and image.

JG: What do you mean by “interdependent cultures”? How should differences between Asian Americans and European Americans influence treatment goals?

LS:  Rather than pursuing happiness explicitly by asserting one’s own rights and acting on the basis of one’s personal judgments of situations like European Americans might, Asians and Asian Americans see themselves as connected to a larger social group, greatly value their social roles (like being a good daughter), and emphasize harmony with others. Accordingly, treatment goals for Asian Americans who have major depressive disorder or bipolar disorder should take into consideration the social group of the patient—whether that is their family, spouse, or children. For example, a goal for an Asian American patient might be: how integrated/harmonious does the patient feel with his/her social group?

Likewise, practitioners might do well to inquire about Asian American patients’ somatic symptoms, like headaches, insomnia, or indigestion, rather than asking directly about mood or happiness.  It is difficult and uncomfortable for a lot of Asian Americans who value harmony with others to admit that they are not feeling well emotionally, especially first-generation Asian Americans who are more recent immigrants. Also, Asian Americans with psychiatric illnesses can increase the chances of family members understanding by framing it in somatic and biological terms.

JG: What are some things people with psychiatric illnesses like major depression or bipolar disorder can do to increase chances of their family understanding?

LS:  I think it all comes down to communication and understanding of other family members. Asian Americans who are second generation may have acculturated to the idea that mental illness is treatable and nothing to be ashamed of, but first-generation parents and relatives may not come in with that framework of understanding. Educating them about what mental illness is and isn’t may be helpful, especially if it is done by medical professionals whose social roles they respect. 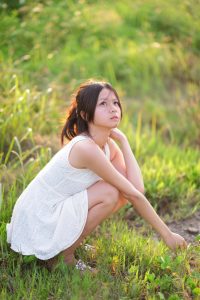 LS: Great question! The model minority myth is the idea that Asian Americans are the “best”-off minority in term of socioeconomic status, education, work ethic, low crime rates, etc. This concept sometimes spills over into the realm of mental health, where the public believes that Asian Americans don’t have any problems. It also reflects onto Asian Americans themselves. Because there is this pressure that they are the “model minority,” some might believe that they have to hide their problems and not appear weak, and that they have to perform…sometimes at the expense of their mental health.

JG: How do our current laws help or hinder understanding?

One issue with the current health care and mental health care system in the U.S. is that it doesn’t allow for families to be as involved as Asian families might want. It is common for doctors and other mental health professionals in the current system to view parents, spouses, or children of Asian American patients as intruding or as a nuisance when, in fact, the patient wants their family to be intimately involved in doctor’s visits and in making decisions about medications and other forms of treatment. I’ve read reports in the news and heard anecdotally of Asian parents who were never informed of their children’s ongoing mental illness due to HIPPA laws, and, in some rare instances, up until the point where the children have died by suicide. That is not to say that HIPPA laws don’t have utility in other situations where privacy is critical. However, the current laws make it extremely difficult for families to be more involved, for the sake of “privacy,” even when Asian American patients have explicitly asked their doctors for their family’s involvement…All mental health professionals need to be informed about cultural norms for Asian Americans and other minority groups, and how they might look different from European American norms. We are a country built on diversity and acceptance, and ensuring that patients of all cultural backgrounds receive the best care will necessarily entail more diverse models of health care practice.

JG: People often face financial limitations in seeking help. What legislative changes need to happen to make it easier for people to obtain the help they need?

Although the U.S. health care system is a complex topic in and of itself that deserves its own dialogue and space, there are a few things that come to mind that need to be addressed in the delivery of mental health care. Although the Mental Health Parity Act was signed into law by President Bush in 2008, we have a long way to go in terms of ensuring that mental health care is as good as physical health care.  Many insurance plans have caps and limits on how many sessions patients are allowed with counselors and psychiatrists, the coverage and/or reimbursements allowed for mental health care is often less than for medical treatments, and only the individual is covered rather than their whole family unit. In interdependent cultures like Asian cultures, family members often rely on a single income and have obligations to take care of ailing family members no matter how old—in other words, cutting children off once they are  26-years old may not make sense in Asian cultures. (There is a saying that once you have a child, (s)he will always be your child, even when you are 65, and they are 40 years old.) Again, much reform is necessary to improve the affordability of mental health care for both minorities and non-minorities alike.

Original Source: This article is from the website “Fashionably Ill”. You can check out this article and more like it on the link below.
Link to Original Article: https://jessicagimeno.com/5-tips-how-asian-americans-mental-health-professionals-can-build-family-support

Jessica is a writer, speaker, and a fighter who has five chronic illnesses: bipolar disorder, polycystic ovarian syndrome, myasthenia gravis, asthma, and psoriasis. Her TEDx Talk, "How to Get Stuff Done When You Are Depressed," has over 1 million views. Her website, Fashionably ill ®, is about surviving pain--mental and physical--with style and humor. Jessica is a contributor to The Huffington Post. Jessica has been featured in NBC News, BuzzFeed, Health Central, and The Mighty. In 2014, MSNBC filmed a mental health documentary on Jessica's life. Jessica graduated cum laude from Northwestern University with a B.S. in Communications and a Second Major in Political Science. She competed for Northwestern's Speech Team; Jessica was a State Champion and National Semi-Finalist in Impromptu Speaking. Jessica is a fan of Pilates, boxing, and all things NKOTB.

Getting Right in the Head